5 Inspiring Queer Asians in the Media

by Saba Teklu in Asian Invasion, Lists, Q-Trends with 4 Comments

We’ve published a few pieces lately from and about queer Asian experiences. So, we figured, why not go all the way and highlight a few of our favorite queer Asian media moguls. No, it’s not Asian History month, but it shouldn’t have to be. Here at QWOC Media Wire, we march to the beat of our own drum, and besides, the peeps on this list are badass.

1) Denise Uyehara is a writer, performance artist, and playwright in one big bundle of amazing. She is both nationally and internationally recognized for her work including the exploration of the US presence in Okinawa, the demoralization of those perceived as the enemy in the states, as well as the Japanese Internment Camps during WWII. Moreover, she is also the founding member of the Sacred Naked Nature Girls, which was a group of performance artists that traveled from 1993-1997 as a culturally diverse experimental group. Her earlier works include “Hello (Sex) Kitty: Mad Asian Bitch on Wheels,” “Headless Turtleneck Relatives,” and “Maps of City & Body.” Now, Denise Uyehara leads workshops for many different communities including LGBTQ, women, and people of color as well as continuing her work as a performance artist with pieces such as Archipelago. 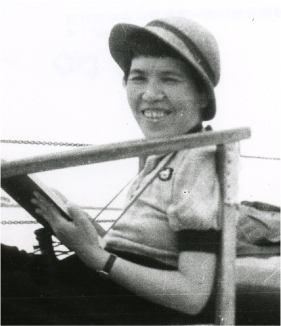 2) Nobuko Yoshiya was a Japanese novelist specializing in romance and teen fiction as well as a pioneer in Japanese Lesbian Literature. Ongoing themes in Yoshiya’s writing included same-sex relations, longing from afar, avoidance of marriage, and female dominance. Yoshiya presented lesbianism as a compliment to heterosexuality and was therefore deemed “respectable” by her readers. Same-sex interest was seen as pathway of female development into heterosexuality and marriage. These series of hers often became the fixation of teen girls. In 1925, Yoshiya founded her own magazine- “The Black Rose”- but discontinued it after eight months. Her most popular works include “Two Virgins in the Attic”, “Flower Tales”, “Women’s Friendship”, and “Ladies of the Heike.” Having passed in 1973, her home is now a museum in Japan that contains handwritten manuscripts as well as some of her belongings on display. The museum is only opened six days a year. 3) Parinya Charoenphol from Thailand is best known for Thai boxing, modeling, and acting. The media was intrigued by a trans women or a “kathoey” beating an opponent in Bangkok’s Lumpini Boxing Stadium and kissing the opponent after the defeat. Soon after, Charoenphol retired from boxing an announced a new pursuit in acting. Her story has been featured in the movies such as Beautiful Boxer, Boxing Cabaret, National Geographic’s Hidden Genders, and in the book Ladyboys: The Secret World of Thailand’s Third Gender. She then made a comeback in the sport by boxing a 140lb Japanese opponent and then beating Pernilla Johansson at Rumble of the Kings in Stolkholm, Sweden. These days, Charoenphol has opened a boxing camp in Thailand with American actor Steven Khan. 4) Margaret Cho is a well known Korean comedian, author, fashion designer, and singer-songwriter. Cho started out her career on the college campus circuit and rapidly climbed the ladder of success from there. She has opened for Jerry Seinfeld and got introduced to the late night circuit by Arsenio Hall. In 1994, she was the executive producer and lead role of the sitcom “All-American Girl” but the show soon ended as the network demanded that Cho tone it down. The discontinuation of the show along with many other contributing factors caused Cho to self deprecate for a bit. Eventually Cho picked herself right back up and proceeded to have yet another show, this time on VH1, Lifetime, and even starred on Dancing With the Stars, Season 11. During one of her performances, a time where discrimination against LGBTQ youth began to surface, Cho made a statement by wearing a rainbow dress. She even said, “I wanted to send an urgent message to gay teenagers to make them feel included and loved.”  Soon after then, she delved into comedic song-writing and even got a Grammy Award nomination for Comedy Album of the Year. Most recently, Cho will be embarking on her tour this August called Mother! 5) Kay Ulanday Barrett is a Philippine spoken word artist, performer, poet, martial artist, and activist. Starting out in Chicago, Kay moved to NYC/NJ and has performed at the Brooklyn Museum, New Jersey Performing Arts Center, and the New World Theater. Kay has also earned many awards such as The Crossroads Foundation Individual Activist Award, The Campus Pride Hot List Artist Award, and The Windy City Times’ “30 Under 30” Award. Barret has also released an EP called Since My Body– a live recording of her performances, written a poetry book called For^in, and even wrote a chapter in the book We Got Issues: A Young Woman’s Guide to a Bold, Courageous, and Empowered Life. Outside of this, Kay cooks, works on his bike, and works with LGBTQ youth.

New British Web Drama “In The Deep” Has It All: Queer People of Color and Great Production!