For my 34th birthday, I gathered with a small group of queer friends of various national backgrounds and cultures, including a straight Lebanese gentleman whom I felt an instant connection with because he pronounced my name right. As we sipped on our drinks, enjoying great conversation — a balance of light and funny, deep and political — in our various accents, lingos, and lenguas, I’d been texting back and forth with another friend — a black woman — and finally invited her to join us. An hour later, she did just that. And things quickly changed.

At one point, surrounded by laughter and love and now also filled with several martinis, I leaned in to one of my dearest friends and said to her, “Yo no puedo beber mas.” I couldn’t drink anymore. We fell into each other laughing. But almost immediately after our innocent exchange, the friend who’d arrived later in the evening demanded, “Speak English. It’s rude to speak another language when the common one is English.”

Now, before I let you know what happened next, I need to let you know that I’d been drinking. And, when I’m drinking (which is rare), I don’t appreciate having my “happy high” brought down. Moreover, it was my birthday. Was I really being told that I couldn’t speak Spanish, my mother tongue, on my birthday?

I didn’t say any of this, but I’m sure it was apparent on my face. I looked over to her, perplexed, and replied, “Really?” And she replied, curtly, “Yes.” The tension across the table thickened as my other friends exchanged glances, both disapproving and embarrassed. There were attempts to continue the conversation and regain the ease of conversation we’d been enjoying prior to the language comment, but soon after I called it a night, disappointed.

There are many words that can be said which (intentionally or inadvertently) often rip at the fabric of an individual’s identity. There are words that, when put together, can evoke a series of emotions and reactions as we attempt to both assert and guard who we are.

As a lesbian activist who primarily works with communities of color, we hear often that these words come from “outsiders,” those outside of our QWOC community. And though I’m quite comfortable rising against outsiders, oppressors who dare to question my identity, there is a deep sense of defeat I feel when the same words used to oppress “us”, are then used by “us”. You need to speak english? Really?

When I was in college, I dated white-women because English-speaking queer women was “all there was.” To my knowledge, I was the only out Latina lesbian in an all-women’s catholic college. Matter of fact, I think I was the only queer woman of color. I had a difficult time with interracial dating, though not as much as I do now. In college, my environment was predominantly Anglo and privileged, and to survive I was often encouraged to “blend in.”

Back then, if I ever took someone I was dating home to Spanish Harlem, NYC, I constantly had to translate or explain things. And while I didn’t mind then, the truth is… I do now. As an LGBT activist who eventually found community with queer community of color, dating white women or even non-Spanish-speaking women of color become even more challenging. I don’t want to explain every single story, conversation or joke. Everything gets lost in translation –mainly my sanity. And when I feel like I have to interpret everything, staying in the moment becomes near impossible.

When I come home, I say hi to my cousin in Spanish. When I talk on the phone to my parents, I speak Spanish (and many times Spanglish). When I speak to my bilingual siblings, I speak Spanish. I digest arroz con guandules. My music collection is mainly Latin American music. I write in Spanish as much as I write in English. I speak to my nieces and nephews in Spanish, so that they don’t forget. I read Spanish literature. My hips instantly sway when I hear a Latin beat. Coño, I even dream in Spanish.

Thinking back to my birthday, in the moment I spoke Spanish, I felt comfortable and felt safe to do so. That feeling of safety was shattered by the command to “Speak English.” I’ve been pondering, since then, the reason English-speaking women of color would break that trust, and have come up with three possible reasons:

1. You think I am talking about you.
2. You’re nosy.
3. You’re  upset because you’re monolingual.

Puñeta, si a mi me da la maldita gana de hablar en mi lenguaje, lo hago! You want to know why? Because I have options. My tongue split when my mother brought me to this country. I weave in and out of both with such ease. For too long, as women and queer and Latina, we have been told to “change” or to fit a mold or to assimilate. And when we do it to each other, we become the very thing we have hated. 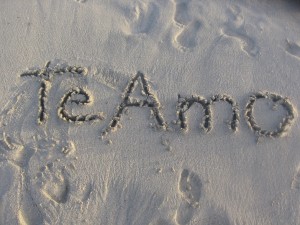 There are many conversations that need to take place in our POC LGBT community and language — particularly the silencing of non-English speaking cultures — must be one of them. Our history dances on the tips of our tongue. Language, whether slang or foreign, is the place we come Home to feel safe. And if, amongst ourselves, we tell each other that we have to speak whatever is the “accepted and expected,” we are nowhere closer to liberating each other from the impact of colonization, than we are to eradicating racism and misogyny. In fact, by policing language, we hold our sisters’ tongues captive in the spaces where we come together to feel safe and celebrate our diversity. And that simply won’t do.

So, to my friends, but especially to any potential girlfriends, oye:

I might have left Dominican Republic and Puerto Rico, but they never left me. And all of these things and many more form parts of who I am. These are also very important for me in a partner. I need you to be rooted in Latinidad because it is there that I feel Home. And that is where I need Love to begin, from a familiar place. When my mother brought me to this country she made sure that I learned the language of this land. But she enforced that we NEVER forget that at the root of our tongues were beautiful sounds that we could return to when we needed to feel at Home.

Trust me, this hopeless romantic would be the first to say Love needs no translation. But I’ve realized that there is nothing wrong with stating your preferences; especially when those preferences are necessary for creating the emotional space you need to feel at Home. For me, language is one of them.