Film Review of “Yes or No?” Using Humor to Break the Silence of LGBT Voices in Thailand 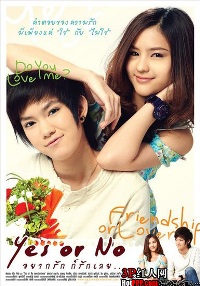 The film “Yes or No”  is a story about two Thai girls in college (Pie and Kim), complete strangers,  who become lovers through their year of rooming together.

Pie comes from an upper middle class Thai family that adheres to traditional thought and customs, including the very vocal disapproval of homosexuality.  She has the sweet personality and good looks that would easily grab the attention of your typical straight male. Kim, on the other hand, carries herself with  deliberate masculinity that defies convention and intimidates Pie upon first encounter, so much so that she immediately requests a roommate change which the college promptly denies.  In response, Pie  draws boundaries in the room to separate her space from Kim’s to avoid as much  contact as possible.

However, As Kim and Pie spend increasingly more time together, those “boundary lines” disappear and Pie finds herself drifting away  from her then boyfriend, to Kim.  As luck would have it, as Pie’s feelings grow,  so do those of Kim’s good friend Zhen who falls head over heels for Kim and actively pursues her.

The drama (and hilarity) that ensues triggers mutual jealousy and sadness and ultimately leads to Kim’s declaration of her love for Pie in the rain,  a dramatic “storming off” scene and a coming out confrontation. (We will leave the ultimate fate  of this pair of star-crossed lovers’  for for you to discover).

Among the numerous queer Asian films that have been produced, Yes or No stets itself apart in that it portrays the most normal and happy image of Asian lesbians’ love life. This film is a romantic comedy, and throughout, joy and laughter are ubiquitous. There is jealousy, hate, laughter, rejection, competition, and everything that constitutes a meaningful relationship between Pie and Kim.

Although there are some somber moments, the film heavily relies on humor as a storytelling tool. For example, in one scene, Kim is working at a garden with her classmates, and Pie secretly passes her a love note and runs away. The entire scene was filmed in the style of a romantic comedy,  something that effectively lightens up the conversation while still addressing their inability to publicly display mutual affection.

In another instance, a group of boys at school jeer at Kim masculinity.  Pie immediately comes to her defense and rebuts with a string of unforgiving insults that drive the audience to laughter. Again, the film broaches a sensitive subject and portrays the very real scenario of bullying, but injects humor via Pie’s choice of insults, and in this way makes a sometimes difficult topic easier for the audience to digest.

Herein lies the power and brilliance of this film – using laughter, it works its way around the silence that pervades in response to Thai, and many  other Asian cultures, sensitivity to the subject of queerness. Like Pie’s mother, it is typical in Asian cultures to ignore the discussion of anything LGBT related all together or to openly condemn homosexuality. By employing humor, the film is able to bring these taboo subjects to light and makes these topics much less intimidating to it’s core audience. This ultimately contributed to the film’s positive reception by popular media outlets and is one way media can be a powerful agent of change.  Yes this is just one film, and yes attitudes in Asia at present remain critical of LGBT persons, but hopefully, via films like this one, the future can change and every LGBTQ couple can achieve their own happy ending.