One evening, I met a friend for dinner. After the typical pleasantries, she shared a deeply personal story and the lessons she learned. I was grateful. This strong, remarkable, and highly successful woman put herself in a vulnerable position for one reason – to share her lesson with me, another woman of color.

Tiona McClodden does the same with her moving short Bumming Cigarettes. She shot the film at the very clinic where she took her HIV test, The Washington West Project in Gayborhood of Philadelphia. But McClodden doesn’t simply tell a story, she shares her story; she shares our stories. She explores one of the scariest moments of her adult life–waiting for the test results of a deadly disease–and, in so doing, empowers the viewer to face that moment with strength and certainty.

Bumming Cigarettes – a narrative depicting its protagonist getting an HIV test – shows that we are all at risk for sexually transmitted infections regardless of our race, sexuality, or gender identity. The likelihood of contracting a sexually transmitted infection between women varies significantly. Herpes, HPV (genital wart virus), and bacterial vaginosis are transmitted fairly easily between women during sex. HIV, hepatitis B, gonorrhea, and chlamydia are less likely to be transmitted than herpes, HPV, or bacterial vaginosis – but it is still possible. Most of these STIs are treatable, especially if diagnosed early. 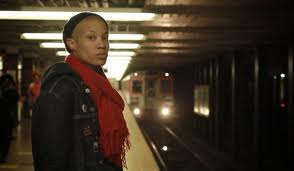 Vee, portrayed eloquently by Alia Hatch, mirrors our fears about knowing our status. Their courage empowers us to face our terrors, visit the clinic, and live with our results. The cornerstone of the short is Vee’s conversation with Jimmy, an African American gay man who has been living with HIV for over two decades, while sharing a cigarette. Jimmy’s story of living with HIV allows the audience to see the humanity of a positive test result.

Tiona states, in a 2012 interview with The Feminist Wire, “The biggest message or idea is to get the [Black lesbian] community to actually take the steps and make the necessary effort to find out their status in spite of what folks are telling them that our demographic is not at risk. Everyone is at risk. I wanted to acknowledge that fearful space as well and work within and through it by portraying the conversation that happens with Jimmy & Vee in those 10-minutes. Let’s visually explore the wait, which can be the toughest part of the entire testing experience.”

In the months of April and May, Tiona McClodden’s production company Harriet’s Gun Media will work with Sistah Sinema to screen Bumming Cigarettes in cities across the country. Visit www.sistahsinema.com for more information.