From Skater to “Skate Her”: Queer Women of Color Invade the World of Skateboarding

“Skate Her” is a short film that was shown at the National Queer Arts Festival in 2003. It was filmed and directed by queer women of color who sought to explore the marginalization of brown people in the world of skateboarding.

If you are a skater, you can probably relate to this, which is why this short s still pretty relevant even though it was filmed nine years ago. The filmmakers make an interesting point about skate magazines and their perpetuation of the dominant discourse, including who gets to vet what and what isn’t an accurate representation of skate culture.

But this film isn’t just about the girls who “would give Barbie a complex.” You don’t have to be a skater to relate to the misrepresentation of women (and more specifically, women of color) in the media. A film about skating resists societal expectations for queer women of color.

“Since when did skateboarding become a qwoc issue?” you may ask. Well, skating has long been viewed as an act of resistance. Skating is a counterculture within itself. But what’s really important to note, especially in this film, is that skating is bringing these queer women of color together.

Not only do we see resistance to the dominant culture’s biased perceptions of queer women of color, but, and perhaps most importantly, camaraderie and solidarity between women of color as they take on the road’s obstacles together.

Skate Her — Watch the Short Film Below:

What are your thoughts on skateboarding in general? What images come to mind when you envision the sport? Do you you think that the skating world has become more accepting to queer women of color (since 2003, per the film) or do you think it has stayed the same?

Meanwhile, if you have QPOC friends who skate (and film themselves skating), please send them our way. You can post their videos/profiles as comments, or, even better, submit links via our Tumblr blog for possible feature on INTERLINQED, our weekly roundup of media created for and by LGBTQ women of color. 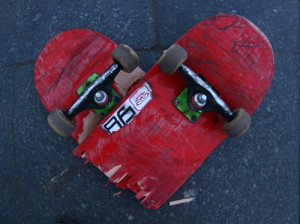