If Not Now, When: Addressing Domestic Abuse in “Between Women” Season One

Web series have become powerful within the last few years, especially amongst people belonging to historically oppressed or marginalized groups. It is one of many independent art forms on the rise allowing people to take agency into their own hands instead of waiting for society to deem their stories “acceptable” for mass consumption.

Web series have been especially powerful for queer women and trans* people of color, filling a void within representations of LGBT people many media power players hesitate to. Between Women, the brainchild of Michelle Daniel, is a web series about a queer women of color friend group living in Atlanta, Georgia. Throughout the first season, viewers travel down a road with the motley crew as they struggle to figure out career goals, family dynamics, raising children, starting families, same sex marriage, infidelity, and even gender identity.

The creation of Between Women, amongst other up and coming queer people of color (QPOC) web series, demonstrates the need for queer women of color to talk about intersectional identities from their unique perspective instead of falling victim to trickle down queer theory that tends to be very eurocentric. The implications of many issues facing LGBT people do differ because of race, and Between Women is not afraid to assert that the difference needs to be acknowledged and present within the conversation.

Yet, Between Women also serves as an important example of something else; specifically the need for creators of web series to be conscious and accountable for the issues they attempt to fold into the overarching narrative of a series.

Web series creators, much like mainstream television creators, are not exempt from casting a critical eye on the content they create, and asking themselves “am I doing this justice?” before putting it out into the universe. Its not only up to web series creators to have that critical eye on themselves, but its up to us as viewers to constantly be critical and mindful of what’s being created in our name, what is serving to represent us and give us visibility. 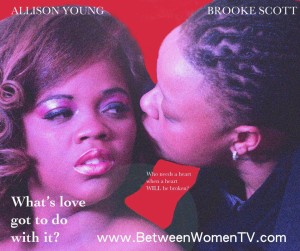 As much as we sometimes long to have more representations of queer brown people out there in the world, artistic integrity and accountability cannot take a back seat to our desperation. It is that exact responsibility as a viewer that motivated me to write about the use of domestic abuse within the series Between Women.

Domestic abuse within the LGBT community is very much a taboo amongst the taboo’d; a subject that doesn’t get a lot of air time in mainstream LGBT discourses about what the community needs to be healthy, happy, whole people.

This is why I was quite surprised when Between Women attempted to tackle the issue of domestic abuse within the first season, and actually managed to make it a relatively sustained subplot within the series.

For Context: A Summary of Partner Abuse Plot Line (Spoilers Ahead)

The issue is introduced through the characters of Allison and Brooke right off the bat in episode one. Immediately you get a sense that Brooke is the abuser from her overwhelming paranoia and insecurity from watching Allison talk to another masculine of center black woman over a bag of chips. She immediately asks Allison whether she’s sleeping with the woman she just talked to, which is a red flag because since when is random conversation over a bag of chips is indication of infidelity? It’s not unless you have a pattern of abusive behaviors, and Brooke’s suspicion of Allison is probably at the shallow end of the pool. Brooke is constantly monitoring Allison’s movements, calling her obsessively, and in episode two it finally escalates to the point where Brooke hits Allison, drags her into the bathroom, and ties her up.

Later on in episode three the rest of the friend group happens upon Allison bound and unconscious, immediately calling the paramedics and the police. In episode four Winnie and Miller attempt to talk Allison out of forgiving Brooke and dropping the charges against her, but getting nowhere fast they leave. In episode five Brooke goes to see a therapist, and in episode six Brooke and Allison process that therapy session. A disagreement between the two causes Allison to leave the house seeking alone time, much to her detriment, because at the end of the episode Brooke attacks Allison again, this time striking her over the head with a crow bar. At the beginning of episode seven, Brooke is arrested by the police and held without bond. The friend group finds out about it by watching the nightly news. The issue of domestic abuse between Allison and Brooke tapers off until Allison visits Beautiful one last time before dropping off the radar. It’s only at the tail end of the season that Allison appears again, apparently living independently but still being stalked by a figure in the shadows.

It’s admirable that the creators of Between Women chose to tackle the issue of domestic abuse within same sex relationships, and managed to sustain it through season one for as long as it did. Yet their exploration of such an important issue doesn’t come without noticeable flaws, specifically with respect to the way an abusive relationships was presented in season one.

For one thing, the main characters outside of Allison and Brooke lacked a nuanced understanding of how complex dealing with domestic abuse is. The proof is in the pudding, i.e the way Winnie and Miller talk to Allison after she’s been released from the hospital. While Winnie and Miller’s pleas to Allison can be read as the desperation friends have in wanting to protect one another, both Winnie and Miller were blinded by their emotions to hear what Allison was saying. Clearly Allison’s defense of Brooke’s behavior and self blame are an indication she’s not ready to accept the bitter truth about their relationship. She asked her friends to support her choice in staying with Brooke and seeing it through, yet Winnie and Miller couldn’t accept that as a solution and instead walked away from the problem.

People who are in abusive situations need to be dealt with a high level of sensitivity. Acceptance of a situation doesn’t come on the terms of loved ones, but inside of oneself. As much as Winnie and Miller clearly didn’t agree with Allison’s decision, there were many more ways of supporting her beyond convincing her to kick Brooke out and showing her black eyes in a mirror. They should have given Allison the emotional space to define friend support on her terms instead of walking away from the situation when she didn’t do what they wanted her to. Additionally, they should have recognized that Allison kicking Brooke out is not the end all be all. Legal resources for domestic abuse victims are not full proof, and oftentimes there are no adequate law enforcemen measures which actually deter an abuser from stalking or harassing their victim even after the relationship has been severed. So to tell Allison to simply kick Brooke out is not the convenient option one would think it is.

Another thing that bothered me was the lack of critical in-group discussion amongst friends after the first and second abuse incidents happened. I’m not inclined to believe that after seeing your friend tied up and bruised you have nothing more to say on the subject. As difficult as it is to talk about domestic abuse, those conversations need to take place, especially in the wake of traumatic events. Only through inter-personal dialogue will people begin to understand what exactly are abuse tendencies and begin dismantling them within ones self and amongst each other. How else can friends begin to hold each other accountable if they aren’t on the same page about what domestic abuse looks like in terms of actions and words? And how can people begin to get on the same page unless the nitty gritty is discussed beyond the notion of “its wrong”? It’s not enough to assume we all know what domestic abuse looks like; we need to talk about our individual contexts for it and work collectively to forge a common understanding.

Last but not least, I found the therapy session Brooke attended in episode five lack luster. Brooke, at Allison’s insistence, attends a therapy session. While I understand that it was one therapy session and you can’t begin to uncover everything in one episode, I found it interesting how the therapist didn’t ask Brooke where she derives her understanding of power dynamics within a relationship. It’s all too easy to blame the tendencies of abusers on a need for power/control coupled with anger. Those are very valid sources and shouldn’t be dismissed. It’s also not easy to identify and name the real life examples of those abusive behaviors, such as witnessing instances of domestic abuse in childhood or un-contextualized displays of abuse and misogyny prevalent in mainstream society. Everyone involved in situations of domestic abuse need to begin addressing the fact that what we see are not always examples to live by, and such emotional processing shouldn’t be put to the side for a later date. 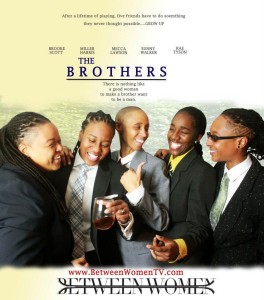 And at the same time Brooke is beginning to process those real life examples, the friend group around Brooke and Allison also needs to begin processing those real life examples. I say this because outside of Winnie and Gabi’s relationship, the main relationships within the series are predicated on the masculine of center-femme dynamic. While that sort of processing should go on regardless of gender dynamics, it’s important to note how a show made the conscious choice to present stud-femme relationships, and made a masculine of center woman the abuser. If this show is attempting to draw connections between roles in abusive relationships and gender identity, then there needs to a conscious effort to have other masculine of center characters within the show actively working to dismantle mainstream societal notions of masculinity that either actively support or less issues of domestic abuse slide under the radar.

As a femme, my femme friends and I constantly joke about how the worst thing about masculine of center women is when they take the worst traits from cisgender hyper-masculine men as part of shaping their own masculine identity. Much as we may laugh amongst ourselves at this, it’s a problem within queer women of color communities that doesn’t get discussed often enough. If a show like Between Women is going to display masculine of center-femme relationships, then it needs to be proactive in discussing how hyper-masculinity and hyper-femininity can be detrimental to our interpersonal relationships and overall health of the queer brown community.

I write this not to condemn Between Women to ratchet web series hell, but to say with the onset of season two there is room for improvement. Through writing, research, and serious character development many of these problems can be solved. The beauty of writing as an art is that it’s supposed to evolve; it’s supposed to argue with itself and draw new conclusions in the process. The writers who commit their work to that trajectory of evolution are the ones who stand the test of time. Writers who are not receptive to criticism and critique fade into the background, not realizing constructive criticism isn’t meant to tear them down but actually see things blossom and grow. I would like to see Between Women blossom, grow, and make queer brown women’s history.