Stud Life is sexy, charismatic, foreign yet familiar. The sensual combination of a hypnotic soundtrack, mesmerizing cast, and a rich storyline pulls you into a world where the accents are different but the conversations are ours – queer women of color trying to define our relationships and our future.

The Google Hangout also discussed the work of Del Lagrace Volcano, a gender variant visual artist who accesses ‘technologies of gender’ in order to amplify rather than erase the hermaphroditic traces of queer bodies, the real-life photographer behind JJ’s work in the film. Paula Harrowing, another emerging photographer of London’s queer community, captured the iconic image which became Stud Life’s movie poster. 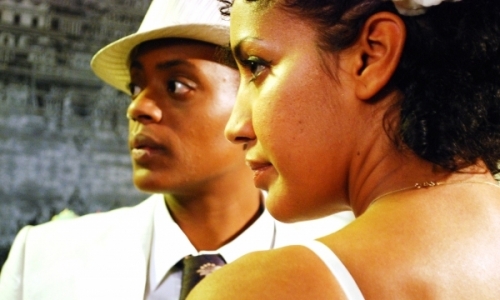 When Campbell X decided to make Stud Life, their goal was to create a story about the cultural diversity of London. In addition, Campbell hoped to pay homage to the richness of queer art history – an example is a shot which includes an issue of Quim, a ninety’s magazine ‘for dykes of all sexual persuasions’ produced by Sophie Moorcock and Lulu Belliveau.

In conclusion, the Google Hangout with the cast of Stud Life allowed for a deeper exploration of the major themes of the movie and articulates the social significance of the film. It also highlights the importance of cinema for and about queer women of color as the community continues to define itself.