I stumbled upon QWOC Media Wire entirely by accident. Last Spring I was Facebook stalking a prospective grad student, a queer brown girl I had just kept it super real with regarding my experience in graduate school as a woman of color. QWOC Media Wire was one of her recent likes and so I clicked and started reading. When I saw that interns populated the staff I knew I just had to find a way to be involved.

Over the next few months I excitedly wrote notes for potential blog pitches. I began noticing that I watched a lot of TV with LGBT people of color and that there was still a lot of media where there were none. So I threw myself into media that focused on an identity that was still very new to me (I came out to my family only a few months before I started the internship). I had been living a life paying attention to the intersections of gender and race and while sexuality was on my radar in my attempts to be an ally, it was usually an afterthought. 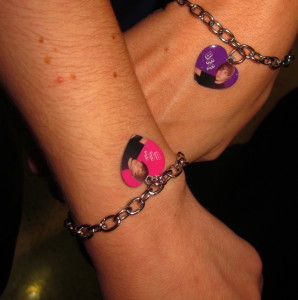 Working for QWOC Media Wire gave me a survey of alternative media that I never knew existed. I read blogs, followed Twitter accounts, watched web series’, and movies by and about queer women of color. But it was still like scrapping the bottom of a barrel, there were barely enough links to share with QWOC’s social media networks.

But still I felt out of place, wrong somehow. I couldn’t relate to most of those stories of queer women dating and navigating spaces as gender non-conforming brown and black folks. I’m a white skinned mixed girl who fell in love with my white girl best friend while we sang Justin Bieber at the top of our lungs, fantasized about meeting Drake and shopped for the perfect red lipstick. I started feeling the residual “not black enough” pangs mixed with new “not queer enough” thoughts.

So when I was asked to come up with a topic for a blog series I immediately thought of “Borderlands,” the places in-between where we don’t quite fit. I knew I couldn’t be the only one feeling inauthentic in my identities and I wanted to create a series that would highlight those stories. I was shocked by how many people submitted to the series.  As I sifted through submissions I read the words that I knew so well, words of confusion and pain, words of letting go and reclaiming. Those words made me realize that I am not alone in this experience and I thank everyone who submitted and was brave enough to sit down and try to express the ambiguity of your lives.

My internship at QWOC Media Wire came at a time when I was tired of academia, tired of reading peoples’ co-opted stories outlined in cold emotionless peer reviewed journals, tired of feeling wrong in cathedral-like building that were not built for me. You put my faith back in the power of people who are creating words from a subjective place.

So thank you for reading my blogs, submitting to my series, favoriting, retweeting and replying to my tweets, commenting and liking my Facebook posts. You made me a part of this community and for that I will always be grateful.