Our intern, Jacquie, comes to you live from Pittsburgh Pride! Well, not quite live, but she did have fun playing reporter-at-large, and sharing her experience participating in the local festivities. Check it out.

Is there anything better than Pride? Pride is the place where we learn that our sameness makes us different and that our differences can actually unite us. There’s nothing more wonderful.

[pullquote3 quotes=”true” align=”center” variation=”purple”]Pittsburgh Pride was a veritable smorgasbord of fantastical delight. I would call it a homotopia, but the best part about it was that there were people of all races, genders, sexualities, and ages, happy to be there, out, loud, and proud.[/pullquote3]

Imagine walking out into a street where you normally look around and wonder if anyone is judging you for holding your girlfriend’s hand and then VOILA! There are 15 year-old girls holding hands in matching pink shirts and two men pulling a bulldog puppy in a wagon!

From impromptu karaoke to fire breathers to some ladies that put the drag in dragon, Pittsburgh Pride featured so many cultural performances that stood out, including some from queer women of color, who took center stage, literally! 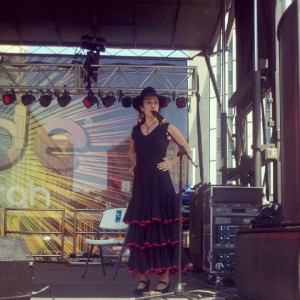 One of the first acts that I saw was a woman named Carolina Loyola-Garcia who did some unbelievable flamenco.

The only thing that was more intense than her black outfit in the sweltering heat of Pride was probably her ability to make her feet into an instrument that rivaled any percussion I’ve ever heard.

One of the best parts about her act was the ensemble that accompanied her. Granted, I would have been able to just watch her feet and her perfectly geometrical arm movements without a rhythm, but she had some excellent backup, and you can tell that they had developed a level of trust. 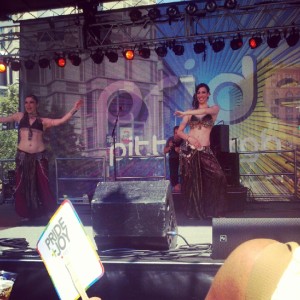 As it turns out, Carolina Loyola-Garcia is actually a professor in the local area of Pittsburgh. She curates as well as creates her own art. Check out her website. What a talented woman.

The next act was a local troupe of belly dancers called “The Hot Metal Muses”. In a word, they were captivating, and an inspiring representation of culture and its intersection with sexuality at pride.

It was great to be reminded that people are always willing to share a part of who they are — their cultures and complex identities — and that pride can be a venue for the learning about different kinds of diversity, beyond sexuality and gender.After so many wonderful cultural performances, I was feeling excited, happy and proud.

And then, it was drag time. Just when I thought it couldn’t get better. Because who doesn’t love it when drag kings of color perform YMCA?! 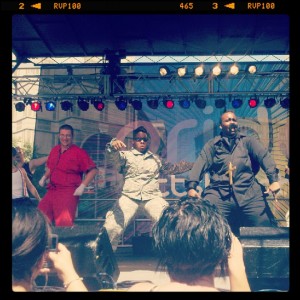 The performance was delightfully creative, and a great twist on a song that pop culture had come to associate with gay men in the 60’s and 70’s. How’s that for cultural (re)appropriation?

The icing on the cake happened when, at the end of the drag king YMCA act, the performance arena turned into a huge dance party!

Between the happy gay people dancing on stage and in the crowd, I felt proud to be representing QWOC Media Wire.

The performances affirmed that there’s a point to be made, even at Pride. Queer women of color are making things happen in Pittsburgh, and we are all better for it. Watch out world. And happy pride!