Brittney Griner spoke publicly about being a lesbian in a recent interview with SportsIllustrated.com. The number one WNBA draft pick is one of the most successful athlete’s in the game right now and was even  offered a chance to try out for the NBA by Dallas Maverick’s owner Mark Cuban.

[pullquote1 quotes=”true” align=”center” variation=”black” textColor=”#000000″]…if you’re just true to yourself, let that shine through. Don’t hide who you really are.[/pullquote1]

Griner spoke about wanting to inspire young people to be themselves saying, “[It’s] definitely something that I am very passionate about. I want to work with kids and bring recognition to the problem, especially with the LGBT community.” She even shared some advice telling fans, “Don’t worry about what other people are going to say, because they’re always going to say something, but, if you’re just true to yourself, let that shine through. Don’t hide who you really are.” 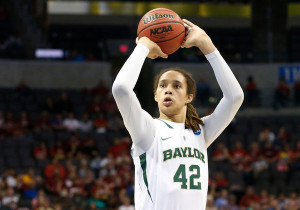 She was very clear about never being ashamed or hiding her sexuality, saying, “It really wasn’t too difficult. I wouldn’t say I was hiding or anything like that. I’ve always been open about who I am and my sexuality. So, it wasn’t hard at all. If I can show that I’m out and I’m fine and everything’s OK, then hopefully the younger generation will definitely feel the same way.”

With so many prominent figures and athletes deciding not to come out, it’s refreshing to have Griner be proud of her identity.

Problematic ideas about strength, athleticism, gender and sexuality cause a lot of speculation about the sexuality of women athletes. Does this contribute to the number of out women athletes? Who are your favorite out athletes? Tell us your thoughts in the comments section.