When I became a co-moderator for the queer Muslims tumblr in October of 2011, I began scouring the internet for everything and anything related to presenting LGBT in a multi faceted light. I wanted sources where LGBT Muslims testified to personal journeys of reconciling sexuality with faith and existing societal norms while still expressing glimmers of hope for the future. What I found was academic publications, fiction books, grassroots organizations solely for LGBT Muslims, documentaries, cinematic films, personal testimonies on youtube, mosques dedicated to being LGBT inclusive and upholding notions of gender egalitarianism with respect to women’s roles in the mosques.

At the same time I became excited by all my discoveries, something troubled me in the deep recesses of my mind. I couldn’t help but notice a lot of the sources I had stumbled upon were overwhelmingly male centric. Even that which sought to strike a narrative balance between queer men and queer women gave priority to queer men. I attempted to make peace with the state of things knowing the focus on the struggles of queer Muslim men is reflexive of a larger problem, specifically the overwhelming androcentrism presented in multiple LGBT narratives around the world. I decided the only thing I could do was keep the blog afloat and hope one day more visibility would be given to queer Muslim women.

[pullquote3 align=”center” variation=”purple”]Dr. Samar Habib is making welcomed contributions to the visibility of queer women in the Arab, Muslim, and western world. [/pullquote3]

That day came sooner than I thought when I stumbled across the work of Dr. Samar Habib. A faculty member at the University of Western Sydney, much of Dr. Habib’s work as an academic scholar centers around bringing visibility to queer Muslim women past and present through a variety of different lenses. 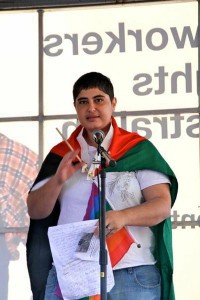 Her published work on female homosexuality begins in 2006 with her article “The Historical Context and Reception of the First Arabic-Lesbian Novel, I Am You, by Elham Mansour”. The following year she published an article entitled “Reading the Familiarity of the Past: an Introduction to Medieval Arabic Literature on Female Homosexuality,” and the book Female Homosexuality in the Middle East: Histories and Representations.

Since then she has gone on to publish extensively on female homosexuality in medieval Arabic literature while occasionally lending her voice to the issue of LGBT people of Middle Eastern descent as it relates to the Israel/Palestine conflict. Outside of academia, she published her own novel A Tree Like Rain in 2005 and created an English translation of Elham Mansour’s lesbian novel I am You in 2008. Recently she has released a historical fiction novel Rughum & Najda (2012) about a relationship between queer women living in ninth century Baghdad.

Dr. Samar Habib’s body of work serves as an example of how narratives regarding LGBT Muslims and Arabs can be balanced out to include women’s voices, by simply focusing on queer Muslim and Arab women of the past so that those in the present and future can have something to draw from.