Yollada “Nok” Suanyot has just become the highest ranking openly  trans-gender female politician in Thailand, winning in the province of Nan, after elections at the end of May. 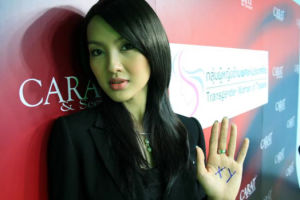 This is Yollada at a press conference. She has also said that she will continue to do entertainment and celebrity appearances between her political duties.

The Transadvocate quoted her during her campaign, saying,

“I’m confident that my experience and ability will be useful in the development of Nan,” she said.  “I want to represent the trans women and all groups of homosexuals across the country in parliament and press the government to pay more interest to women and trans women.

It is also important to note that Yollada was successful without a political party’s support. She ran as an independent candidate surpassing  the ruling party’s candidate.

As quoted by care2.com, she said,

“Good laws protecting transexuals have yet to come. We’re still on the fringe. Look at me. My role in society is that of a woman. But the law recognizes me as a man. That doesn’t make much sense, does it? Perhaps we now have greater acceptance in society. But not when it comes to legal rights… so, if we’re jailed, we’re put in prison with the men. We can’t get proper health insurance. We can’t get married. We have problems travelling outside the country and trouble dealing with banks and government offices.”

According to Trans Griot, among her other accomplishments, “she is currently the president of the TransFemale Association of Thailand, she runs a satellite television station, has a PhD in Social Science, was once a member of an all-trans Thai pop group called Venus Flytrap, owns a jewelry business, and has been a strong advocate for TBLG rights.”

The basis of her campaign focused on resolving flooding problems, as well as proposing a hotline for young people focused on youth services, among other issues.

Please join us in congratulating Yollada ‘Nok’ Suanyot on her landmark victory! We could not be more proud to celebrate the success and visibility of yet another member of our community.